Guilt Free Gaming: Why Nazis are the Perfect Antagonists

The very first “bad guys” I ever killed in a first-person shooter were Nazis.

Actually, the first one was dead already by the time the game started, but as B.J. opened that prison door, that brown shirt, stalhem rocking guard “got his” as they say, and thus began a trend that would see the next two-and-half decades of video game antagonists frequently being the swastika clad monsters from the Second World War. From deadly serious renditions of the horrors committed by the SS to over the top, mecha-Hitler and Nazi moon bases, the Nazi is the perfect villain in the realm of virtual combat, and in this current political climate, it’s important we remember why. 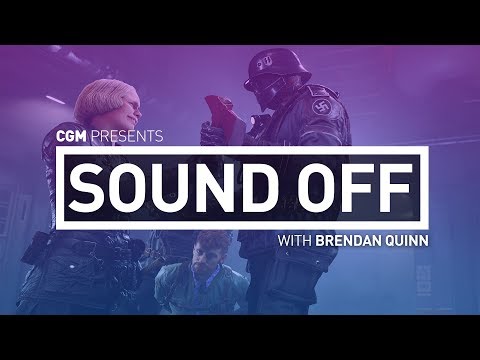 There are several good reasons why the Nazi functions perfectly as an enemy in a video game. First of all, as far as shooters are concerned, every game needs legions of faceless goons to mow down en route the various goals the hero is trying to accomplish. Sure, DOOM had its myriad demons and monsters to blast, shoot, and carve up with a chainsaw, but in a way that’s a bit of cop-out. When you’re killing fictional creatures, you stray away from any moral quandaries and questions of ethics. They’re fictional fiends from a fictional Hell, they’re not based in any reality and so you never have to question “why.” The Uncharted series has gained notoriety over the years for its fun, quirky protagonist who also happens to commit murder on a mass scale. Nathan Drake is supposed to be an Indiana Jones type scruffy and scrappy hero that we all love, but his body count is through the roof. Most of the guys he’s killed are simply regular Joes working a minor security contract in some exotic locale. They’re not necessarily evil men, and chances are most of them have families at home that they’re trying to feed by doing this job.

However, slap a swastika on one of those goons and boom, the ethics question no longer matters. The swastika represents a real-world evil, one that directly caused the deaths of millions and indirectly caused the deaths of millions more. Even ignoring for a moment the countless atrocities, the SS were cartoonishly evil. From the red and black leather Hugo Boss uniforms, obsession with spectacle and Wagnerian epic, enormous tapestries and towering neoclassical architecture to their interest in ancient cults, mythical artifacts, and almost science fiction level attempts at weapons technology, no writer could come up with a group of people so ridiculous but at the same time so seriously vile and malevolent. It’s a perfect formula for a medium of entertainment like video games, evidenced perfectly by two major recent releases: Wolfenstein II: The New Colossus and Call of Duty: WW2. The former takes the insane goals and style of the Nazis and cranks it up to 11, while the latter deals with the subject in more grounded, serious way.

The Nazis were into some weird stuff, to say the least. They were also completely obsessed with myth, mysticism, secret societies, and the pagan beliefs of what they believed to be their ancestors. The Thule Society was an occult study group founded after the First World War that centred primarily on the mythical origins of the German people named after for the areas in Northern Europe from which the Nazis believe the “master race” originated. The Thule Society believed that the Aryans were an ancient and highly advanced race that existed prior to recorded history and was associated with Atlantis, ancient elder gods, and Hyperborea. Early members included such big names as Rudolf Hess and Heinrich Himmler—allegedly. When the protagonist of a game becomes weary of mowing down standard soldiers, why not throw in some ancient technology or magic brought forth by a secret cult of Nazi higher-ups to make things more interesting? Return to Castle Wolfenstein tackled this subject quite well and combined it with Hitler’s fascination with ancient artifacts like the Spear of Longinus and the Holy Grail.

Of course, whacky cults and ancient technology certainly make for a fun twist on things, but the reality is that the real Nazis were, quite simply, the most villainous and downright evil organization that the world has ever faced. Horrors like the Holocaust and the Eastern Front were the biggest, most industrialized murder machines the world had ever seen. And it was all planned right from the get-go. The Nazi worldview was based entirely around the eradication of entire populations and the conquest of their lands. There is no logic to be twisted here, there is no “both sides,” no misunderstandings or misinterpretation to be had. Most wars are not “fights for freedom,” the First World War was the elite and the wealthy throwing millions into the meat grinder for no good reason. Vietnam was about protecting American Hegemony—or preventing Russian hegemony depending on whom you talk to. The Second World War was about defeating the Nazis and liberating Europe—and parts of Africa, Asia etc.—a clear-cut example of good vs. evil with very little moralistic wiggle room.

And that’s what makes them the perfect villain. You don’t have to question or feel bad about killing them. The cause they represent was beyond unjust and oppressive. There isn’t some deep, philosophical bent to whether or not the hero of the game is doing the right thing. The conflict itself can be shaped in different ways—goofy and over the top or strictly grounded in reality—but the bad guys remain, in every way, the bad guys. They’re not fictional monsters, they’re real monsters who did monstrous things of which we are still feeling the effects. I started playing video games by shooting virtual Nazis and I will continue to do so until that well is tapped, but I don’t think it ever will be. We might get fatigued now and then, but history looms large in the minds of humanity, and when we run out of aliens and undead to shoot, we can always fall back on the Nazi as the ultimate antagonist.

File Under: Call of Duty, Wolfenstein