Fans waited nearly 20 years for a follow-up to Neverhood, and for good reason. It pretty much had it all — a unique art style, an incredible world that you didn’t want to leave, and great adventure-based gameplay. People still replay it to this day and venerate it as a shining example of how the point and click genre still holds up. So when Armikrog, a spiritual successor was announced, people flipped out. Sadly, it lacks the same polish and care as the original.

At the start of Armikrog we get a stylish claymation cartoon that’s very Doug TenNapel (creator of Earthworm Jim, and you guessed it, Neverhood), which is just fine with me. I love the style and find it to be a lost art, especially when it’s masterfully crafted, as it is in the cutscenes. This time around we’ll take control of Tommynaut and his dog Beak-Beak, the latter of which sees in shades of grey, as they embark upon a quest in a foreign land. Immediate “blast from the 80’s/90’s” feelings overcame me, especially with some of the early alien designs that look like giant balls of fluff, evoking images of Fizzgig from The Dark Crystal. It’s not only impressive looking, but endearing as well that a game can connect this quickly with its audience. 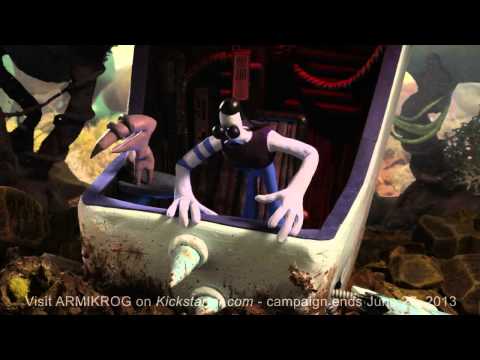 Although it seems like a platformer, Armikrog is actually a point and click adventure, which are amazingly making a comeback in recent years. The gameplay, however, is far too rigid. My main concern is that it’s hard to tell what is and isn’t an object. For example, one screen has players interacting with a tile puzzle. If you click the puzzle itself and try to move the tiles, it exits the panel. Instead, Armikrog wants you to click specific sections of the screen — arrows around the perimeter that move the tiles.

The issue is that not only are these arrows not highlighted, they’re not even pronounced in any way, even when you rest your cursor on them. It’s like this for the rest of Armikrog, in the sense that it’s not terribly difficult to figure out puzzle solutions, it’s just tough to literally find the way to input them on the screen. There’s another caveat — I can’t say I’d recommend the game on consoles, because using the analog stick to select things on-screen with a pointer isn’t nearly as intuitive as just using a mouse (you can use the touchpad on PS4 but it’s awful).

These issues are doubly problematic for the Beak-Beak sections. Beak-Beak has a sort of sonar sense for items in his warped monochromatic world. It’s cool from a technical and creative standpoint, seeing the world differently (which extends to literally seeing new things like writing on a wall), but it’s muddled by a lack of direction. Then again, Beak-Beak immediately becomes charming again when he grabs the item and later pukes it up for Tommynaut. It’s that kind of game, where it can dance between annoying and near-cloying instantly, even if the world itself is actually terrifying. If I see a cutscene I’m usually laughing, and immediately taken out of the more frustrating elements. I wish there were more of them, though.

If it sounds like I’m torn on Armikrog, I am. It’s bringing back some old school PC sensibilities and I can respect that effort, but it doesn’t go far enough. The entire experience is short-lived, clocking in at just a few hours, which is only enough time to get marginally invested before the curtains close. I feel like the team either ran out of time, money, or both, and needed to conclude the project, and it shows, most notably in the sense that the characters don’t really feel like they’re part of the world so much as merely investigating it. It would have made a much better feature film, as the story is worth telling and the art style is incredible, but for now, wait until it’s the price of a movie ticket before jumping in.

A space explorer and his alien dog wade through a mysterious planet with a dark secret.
REVIEW SCORE
6
File Under: Adventure, Nintendo Wii U, PlayStation, Versus Evil, Xbox