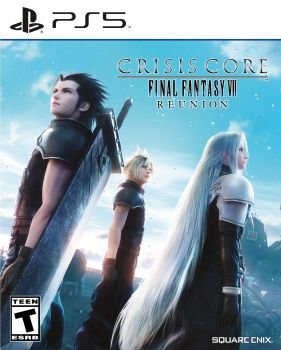 Twenty-five years ago, Final Fantasy VII was a watershed moment for the gaming industry, elevating standards across the medium and pushing the Sony PlayStation into “must-own” territory. Fifteen years ago, its prequel launched to much less fanfare, but still hit fans and newcomers alike directly in their heartstrings. Now its remaster, Crisis Core Final Fantasy VII Reunion, has arrived to both celebrate the original game’s anniversary and provide new context for the future of the Final Fantasy VII Remake project.

Crisis Core is the story of Zack Fair, mentor to Final Fantasy VII’s complicated hero Cloud Strife. Originally seen in mere glimpses and bonus scenes in the original game (and an obscure cameo in a Squaresoft fighting game), Zack was rocketed to protagonist status with a PlayStation Portable action-RPG adventure. Through his eyes we see the inner workings of the legendary SOLDIER squad, the Shinra Corporation’s tools of war, and the truth behind several key moments in Cloud’s life.

The beauty of Crisis Core’s plot is fully realized if you’ve played Final Fantasy VII and experienced Cloud’s unreliable perspective (though newcomers shouldn’t be deterred). However, after all this time the game’s writing remains goofy or muddled at times, even if it’s been somewhat polished; meme-worthy one-liners and clunky philosophizing about the monstrous nature of SOLDIER members remain intact.

Crisis Core Reunion (the game’s original name was also clunky enough in 2008, Square Enix, thanks) does truly benefit from being fully voiced this time around. The PSP version relegated many conversations to text only, but a whole new recording brings the script new life. This means the original English cast has been replaced with the Final Fantasy VII Remake actors for continuity’s sake, and proves a mixed bag.

Returning Remake actors—especially Tyler Hoechlin as Sephiroth—continue to impress with their fresh takes on these characters, and newcomers for this game step into their roles admirably. Although I admit I needed half the game to grow used to Zack’s new actor, Caleb Pierce. He does an adequate job of stepping into the iconic role vacated by Rick Gomez, especially in the more “puppy-like” aspects of the character, but the original performance truly brought Zack to life in the eyes of many fans and his shoes are tough to fill. (Of course, new players won’t have this baggage.)

Despite its reputation for making fans cry, Crisis Core Reunion is heavier on the gameplay side than the plot, and its engine has been well-adapted for modern technology. Expanding from the PSP’s cramped layout to a controller’s full suite of buttons is a godsend itself. Basic attacks are mapped to the Square/left-face button, while magic and abilities from equipped materia are accessed by holding down the R1. An array of basic functionality upgrades and new tricks like interrupting boss attacks or new benefits for the Buster Sword do a lot to rejuvenate the experience.

They also help balance one of the more contentious elements of Crisis Core’s gameplay: the Digital Mind Wave (DMW) system, a slot machine that constantly runs in the corner of the screen. This random element dictates when Zack and his materia level up, or when he can use limit breaks and summons, and grants benefits like removing the MP/AP cost of spells and abilities. Limits are associated with characters he meets, and memories of their interactions can be triggered mid-battle.

As on the PSP, the DMW’s benefits can be tremendous, but it remains frustrating not to have control over some of these things. At least with so much more flexibility in Zack’s repertoire, that frustration feels mitigated. (And it’s still an effective means of emotional manipulation, giving hints to Zack’s psychological state in key moments.)

Speaking of the PSP version’s flaws, one common criticism was the monotony of its staggering 300 side missions. These are a relic of Crisis Core Reunion’s handheld origins—brief detours to slay a monster, fighting random enemies and nabbing treasure along the way. They’re the means of acquiring the game’s best items and accessing its ultimate challenge.

They’re also pretty stale, all taking place on a half-dozen reappropriated environments with slightly altered layouts. Luckily, they benefit from the revitalized gameplay elements, as well as from the improved visuals. I found myself distracted by them once again, the completionist in me eager to complete every do-able challenge before moving forward in the story. I was originally tempted to try the Switch version just so I could grind through these absent-mindedly, but while they eventually did start to feel like a slog on the PS5, it wasn’t as oppressive as I’d dreaded.

Without having tried or seen the other versions, I’d highly recommend the PS5 version of Crisis Core Final Fantasy VII Reunion simply for the benefits of its hardware. For example, load times: the PSP version would stop you dead for every random encounter—where it used to take five seconds just to load your foes in each fight, you can end many conflicts in ten to fifteen seconds now, all told and depending on your progress.

Visually the PS5 version is impressive by-and-large. There were moments at the start of the game where I was very aware that I was playing a remastered PSP game, from the quality of the upscaled prerendered video sequences to the look of certain character models—something about Angeal’s face bones seemed off to me. This quickly went away, fortunately. Environments, characters, and battle effects look amazing, rivalling yet not quite surpassing the high bar set by Final Fantasy VII Remake.

If the Remake left you wanting more, and you’re looking for something to hold you over until Final Fantasy VII Rebirth launches next winter, Crisis Core Final Fantasy VII Reunion is a must-play. I would go even further to say that if you’ve ever played Final Fantasy VII, and even if you’ve experienced the PSP original, it’s still essential. It’s not as deep as the Remake, nor as richly developed, but Square Enix has done an outstanding job of creating something that honours its source material while making a bridge to the next piece of the larger picture.

Zack’s role in the Remake project remains to be seen, but if the development team thought it necessary to make his origin story accessible to a new generation for context, the story of the Buster Sword’s succession is sure to be relevant again—and fortunately, Crisis Core Reunion sands down the PSP version’s rougher edges for veterans to refresh their memories and newcomers to experience for the first time.

Crisis Core Final Fantasy VII Reunion releases a cult classic from its outdated prison and revives it like a Phoenix Down. If you’ve ever played a Final Fantasy VII title, this is an essential experience.
REVIEW SCORE
9
File Under: