Groovy, and it Won't Swallow Your Soul 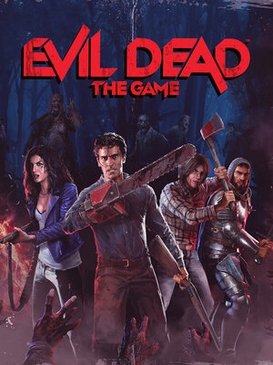 Evil Dead fans haven’t had a proper video game based on the series in 15 years (unless you want to count a defunct mobile game), but was it worth the wait? Maybe. It depends on what you’re hoping to get out of the game.

If you’re looking for an asymmetrical 4v1 multiplayer game that at first glance looks similar to Dead by Daylight but plays more like a melee heavy Left 4 Dead with survival/battle royale-like scavenging, then you’re in luck because that is exactly what Evil Dead: The Game is. 4 survivors must work together to scavenge weapons and upgrades while finding and collecting 3 pieces of a map, which reveals the location of the Kandarian Dagger and lost pages of the Necronomicon. Survivors then have to huddle near these items (think King of the Hill) for a set amount of time while being rushed by enemies. Once these items are collected, the location of the Dark Ones will be revealed, who must be destroyed by the players by shooting beams of energy until they are defeated, revealing the Necronomicon. Lastly, survivors must prevent the demon player from destroying the book for two minutes to win the match.

While there are guns in the game, ammo is quite limited, thus most of the combat in the game is melee-based. As fists don’t do a whole lot against enemies, you’ll have to search through houses, barns, and tool sheds (of course) to find melee weapons, ammo, Shemp cola to restore health, and amulets to grant shields. Thankfully, melee combat feels weighty and satisfying with many gruesome finishers that have deadites’ and skeletons’ skulls being sliced, diced, and crushed by a variety of weapons including knives, baseball bats, swords, and, you guessed it, chainsaws.

In my experience, matches last around 20 minutes or so out of a 30-minute timer, which I’ve yet to see run out. Ideally, players will want to work together to rush through objectives while snagging what upgrades and weapons they can, as the demon player is always getting stronger and levelling as time goes on. The problem is that the tutorial doesn’t do a great job of teaching you this urgency, nor how to use any of the in-game communication wheels, and large wordy on-screen tips clutter up the screen during matches (thankfully they can be shut off) to try to help, but the action rarely allows time to read them. While you’re told the name of the area where the pieces of the map are at the start, you aren’t directed there by any waypoint unless someone pulls up the full-screen map and manually marks it, which certainly breaks immersion and is clunkier than it needs to be.

Getting around the map means hoofing it on foot while managing a stamina meter affected only by sprinting, or by driving cars that are purposefully touchy to keep them from feeling overpowered. Vehicles also tend to flip over on their sides or break pretty easily meaning you’ll want to stick to roads generally, but sometimes throwing caution to the wind and blasting straight through the woods as a shortcut is a thrill.

Playing as the demon has you zipping around in first person, picking up red glowing orbs of energy and setting traps, which at first feels like a twisted game of Pac-Man. This energy can be used to not only set traps, but to spawn minions to attack players, as well as possession. Demon players can take control of their minions for brief moments to attack the survivors, as well as possessing the survivors themselves, which leave the possessed player watching helplessly as you wack and blast their partners in control of their bodies. Right now there’s only 3 different demons in the game, and they play quite similarly like most things in Evil Dead: The Game. Henrietta spawns deadites, Evil Ash spawns skeletons that can be buffed by hiding a flute player nearby, and Eligos who can dart around as electricity while his minions explode on death if killed via anything other than a finisher.

Apart from their perks, none of the characters play differently enough to feel substantial, and that goes for demons and survivors alike. Most of the time you’re doing the same thing: meleeing like your life depends on it, because it does. Playing as characters earns progress towards levels, which unlock points to put towards a perk tree that grant additional damage, health, items, and various buffs, but even with a maxed out character they don’t feel all that substantial; which is great for new players but those grinding away might be disappointed.

Visually, Evil Dead: The Game looks great. The developers at Saber did a good job recreating the iconic camera angles from the films for when driving vehicles or controlling the demon. The two maps in the game currently are both pretty large and included a few locations fans of the series will recognize, however, don’t expect there to be a cabin surrounded by woods and only one bridge leading to it, as these are more hodgepodges of locations from the series or newly created rural areas that aren’t all that memorable.

Everything sounds pretty great too, except for the voice acting. While a lot of actors return to play their characters, it is not all of them, with mostly Army of Darkness actors missing, and the lines, in general, are delivered rather dryly with less camp or excitement than is common for the series, which makes them land with a thud. For a series rooted in both horror and comedy, I rarely found Evil Dead: The Game funny, but I’m not certain if that’s because of the line delivery, or the writing. Characters are rather chatty, as well, and say some of the same lines over and over. I’m rather burnt out on hearing characters make remarks about making light when turning on campfires or using their flashlights, that is for sure.

Those looking for plot, lore, or a single-player experience should look elsewhere. Evil Dead: The Game, while primarily a multiplayer game, does offer 5 missions to complete solo. However, these missions are light on story apart from a couple of still screens with a sentence or two to justify the objectives, don’t do much in the way of preparing you for multiplayer, as you’re the only survivor and some of the gameplay is quite different (such as Pablo’s mission is a lot of stealth), and are frustratingly difficult to the point that I’ve only seen one other player play as Lord Arthur, the final unlockable character.

“Evil Dead: The Game is a bloody good time if you can find players or friends that want to communicate and work together.”

That’s right, completing solo missions in Evil Dead: The Game is required to unlock the remaining 4 of 13 survivors to use in multiplayer, as well as 5 audio recordings from the Knowbys. These recordings mostly repeat the Knowby’s stories from the series and the only thing you’re missing out on by skipping them is a limp explanation for some of the Army of Darkness characters being in modern times. What isn’t explained, however, is how Lord Arthur knows how to drive vehicles in his mission. Maybe he practiced off-screen during his movie, I guess.

There are a few glaring rough edges right now in the game, such as characters simply popping out of vehicles without any kind of animation when destroyed or possessed by the demon. Also, when trying to pick up items or start fires sometimes the prompt won’t start or will show finished, but then the action won’t take place even though it wasn’t interrupted by an enemy. Sometimes, when opening crates items glitch and bounce through the air before landing far away. Some vehicles just have flat bottoms when flipped over, as if they are made of metal slabs, while others are fully modelled. Maybe some older cars are actually this way? I wouldn’t know, I’m not a car person. Lastly, there’s no field of view slider, this means the game is practically unplayable while in fullscreen on my ultrawide monitor; playing in a windowed state is a workaround, at least.

Hopefully, that handful of issues in Evil Dead: The Game can be ironed out in a future update. It is implied in the game that at least one more mission is “coming soon” but an official roadmap hasn’t been released at the time of writing. The season pass promises an unspecified number of characters and cosmetics on the way, with the first lacklustre pack of outfits being available now, and developers have announced a third map to be added to the game based on Army of Darkness.

Evil Dead: The Game is a bloody good time if you can find players or friends that want to communicate and work together. It looks great, it runs great, it’s mostly fun, but quite repetitive, and has some rather annoying bugs. It doesn’t add anything to the series but instead settles for simple fan service, and that’s alright with me.

Evil Dead: The Game is a 4v1 asymmetrical multiplayer game that is more speed and combat-oriented than the stealthy slay-fest that is Dead by Daylight. It's a bit repetitive and doesn't add anything substantial for fans of the series, but it's still a bloody decent time.
REVIEW SCORE
7
File Under: Evil Dead, Horror