The Business of Beat-downs and Babys 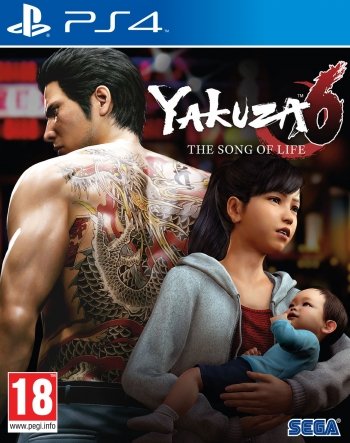 What seems like ages ago, I picked up a new game for the PlayStation 2. I had heard people say a few odd things here and there on the internet about it, but, as far as I knew, I was the only person where I was who had heard about it. I got a fair bit of play out of it, but I needed to move around a few times after, ensuring that the game would never be properly unpacked and beaten, but one thought has stuck with me pretty consistently ever since that adventure: “Man, I really dig that Yakuza game.” I was able to confirm the veracity of that statement again with Yakuza 0, and can only say that the most recent entry in the franchise, Yakuza 6: The Song of Life feels like the perfection of everything that has stuck with me for so many years.

Yakuza 6: The Song of Life is an astoundingly entertaining game with a thought-provoking story and solid mechanics. Even better, it manages to pack a staggering amount of content into a relatively small open world map, sometimes even entire other games. It feels like you actually have to try to get bored playing Yakuza, because around every corner is another fight, or weird sub-story, or arcade (full versions of Virtua Fight 5 and Puyo Puyo have been added to the local arcades this go around), or karaoke bar, or stray cat for your cat café, just to name a few completely non-story related activities you can find. This game, as with previous entries, brings a lot of bang for your buck, and it’s all fun.

If you are unfamiliar with the Yakuza games, don’t feel intimidated; this is a fine point to jump on. Yakuza 6 provides any necessary background information right at the start, with some other tasty story bits easily found through context. To be honest, the Yakuza games have had some pretty great stories, but series protagonist Kazuma Kiryu is sufficiently dumb and honour bound enough to avoid being any great mystery. That’s not to say that series regulars will have to suffer for the sake of new fans; there are plenty of callbacks and familiar faces to make you feel all warm and nostalgic here.

So, the story breaks down like this: players will take control, once again, of the Dragon of Dojima himself, Kazuma Kiryu, the former chairman of the Tojo clan yakuza organization, on-again, off-again criminal with a strong sense of right and wrong and an orphanage to run. He’s coming out of a three-year stint he did in the pokey for punching too many faces and probably organized crime. In the meantime, his adopted daughter, Haruka, has left her life as a pop idol while acknowledging that her legal guardian is a member of the yakuza. Haruka minds the orphanage while Kiryu is doing time until she realizes that her links to organized crime might reflect poorly on the kids she’s caring for, and jets on out of there, leaving the kids with no adult supervision, but one of them can cook and another plays baseball real good, so I’m sure they’ll be fine. Eventually, Kiryu gets out of the big house, older and a bit grumpier than before, and returns to the orphanage to find Haruka gone. He quickly puts some pieces together and leaves the children to their own devices while he goes back to Tokyo to talk to some of his old friends from his crime days.

As ridiculous as it can sound, Yakuza 6 is a masterclass in marrying serious drama and excellent pacing with absolute insanity. One moment you’re discussing gang politics in the ever-crowded turf wars boiling up all around you, and the next you are literally in a fist fight with an old friend of yours because you just really want to steal a baby. Another section has you searching the city for answers with said baby in tow, only to have it get fussy and demand attention, performed by actually rocking the PS4 controller while your significant other looks on at you, concerned.

The graphics are gorgeous and the city is as alive as it has ever been, filled with old friends, new friends, and enough mini-games to make you forget about what you probably should be doing right now, and fights around every corner. In fact, the transitions into a fight are so smooth and quick that I already had a menacing man punching me in the head before I realized that we were ready to go, no loading time in any step of the process. The fighting itself is fun, it’s easy to rely on a few simple combos or get into some of the more technical nitty gritty if that’s your thing. Boss fights and raids are difficult but never feel impossible and I enjoyed every one of them.

My biggest complaint is that the text is sometimes presented as light coloured text over a light coloured background, making for awkward reading at best. Considering that this game is completely voiced in Japanese, that’s a bit more of a concern than it might seem.

There are so many moments in this game that I want to go on about, but I really need to let players find them for themselves. Yakuza 6 has so much to offer and every moment of it is a joy, even if you can’t always read what they’re saying.

Yakuza 6: The Song of Life is everything I want in a Yakuza game, plus a baby… and a cat café.
REVIEW SCORE
9.5
Buy On Amazon
File Under: Action, Adventure, fighting game, PlayStation, Sega