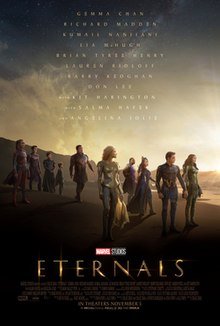 Marvel’s latest phase in the MCU is well underway, and we are introducing a whole new group of heroes in the Eternals. It’s a group that the casual Marvel fan might not be familiar with, but with similar success with a movie like Guardians of the Galaxy, I came into the screening with a lot of hope. Those hopes, I am sad to say, were largely dashed.

The movie is about a group of Immortal beings, called Eternals, who are tasked by a Celestial named Arishem to destroy these creatures called Deviants. During a mission on Planet Earth in 5000 BC, they come to love the people of this little planet and live among them while they wait for orders to return home.

From the beginning, Eternals felt very different. It starts with a crawl, explaining The Eternals a little. I have never been a fan of the crawl outside a Star Wars movie as everything explained in the text could be explained in dialog. The opening scene also features the classic Marvel hero shot (Think The Avengers or near the end of Guardians), but it feels so unearned given that you don’t even know the characters’ names at this point.

Cut to present day and we see our heroes living normal lives, until the Deviants return and the team has to get back together to face the returning threat. In the meantime, the Eternals learn a lot about themselves and their true mission.

Given the quality of the cast in Eternals, I was surprised to see Gemma Chan, as Sersei, was the de facto lead actress in the movie. It starts off with her living her life in London and seeing that she is dating a character played by Kit Harrington, who is very pleasant in the film (maybe compared to the bleak Jon Snow too much here, though).

She is living with fellow Eternal, Sprite (Lia McHugh), who is  with her as they encounter the resurgence of the Deviants and later joined by her super ex-boyfriend, Ikarus (Richard Madden, Game of Thrones). That’s right, the Stark Brothers are in a love triangle. This returning danger leads to the longest “getting the team back together” sequences of all time.

A typical version of this sequence is a montage that gives you a little view into each character and usually only lasts a few minutes. This one is a series of long scenes preceded by long flashbacks. We don’t encounter the final member of the team until over an hour into the two and a half hour film.

Flashbacks are used ad nauseam in this movie, most of which don’t provide you with any significant character or plot development. Any important content from the flashbacks could have been cut down to less than a minute.

The revelation of the true nature of the Eternals and their mission was quickly dumped on us and just as quickly processed by the bulk of the characters who, as their entire reality should have been shaken, moved past it much more quickly than they should have. It could be argued that they could have used more time with it by sacrificing some of the first half of the movie.

The remainder of the movie, including all the final battles and resolutions, felt incredibly lazy and rushed. The idea that everything could end so abruptly in such a long movie and some expected consequences of the movie either didn’t happen or happened in a way that left me asking myself “what did I just watch?”

A bright point in the film was the cast (for the most part). Angelina Jolie delivers a very Angelina Jolie-esque performance which was perfect for the role of Thena, Salma Hayek portraying the strong and somewhat motherly leader of the group and Richard Madden playing the strong, serious type (ignoring the fact that he is basically a copy of Superman, so much so that it is mentioned in the film).

Kumail Nanjiani (Silicon Valley, The Big Sick), is a light-hearted highlight of the film and the one character who has a fun explanation as to why he hasn’t aged in thousands of years. Brian Tyree Henry (Atlanta, Spider-Man: Into the Spiderverse) has the combined role of comic relief, but also serious in that he seems to have the most to lose.

Gemma Chan delivers a competently believable lead role, being one of the more humanized characters in the film. Her only major hurdle is being in the shadow of a more elite ensemble.

The Eternals is my first experience in complete disappointment with an MCU film. Even titles that I didn’t fully enjoy came with some elements that were exciting, either by furthering the Infinity Saga or just some fun sequences, both of which were sorely missing in this film. It’s a movie that took itself a little too seriously and misused the simplest storytelling tools to help make this into something great. The franchise is not beyond saving, but if it moves forward, it needs work.
REVIEW SCORE
4
File Under: Marvel, MCU