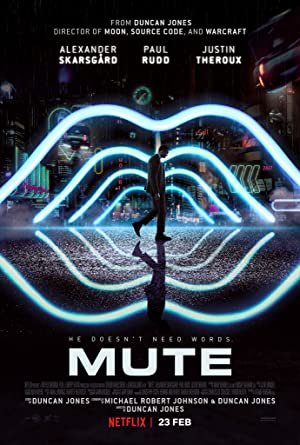 For some reason, there seems to be an explosion of dystopian science fiction flicks these days. Well, it’s not for some reason. Dark and paranoid times tend to be reflected in films, even if by accident. So in the same twelve-month period where Blade Runner got an unexpected sequel, Netflix keeps dropping dystopian series and movies like it’s their job. The company’s latest dabbling in depressing futurism should be cause for hype and excitement, yet the service has let it slide into the streaming world without much of either.

Mute is the latest feature by Duncan Jones—AKA David Bowie’s son. AKA the guy who made the brilliant Moon, the solid Source Code, and the massive mess that was the Warcraft movie. After butting up against studio politics of restrictive franchise filmmaking, Mute was supposed to be a return to form for the promising director. A chance for him to make an original sci-fi epic that takes place within the Moon cinematic universe with complete freedom and mountains of money from Netflix. What Jones delivered certainly isn’t without interest. It’s loaded with intriguing ideas and beautiful images that sadly fail to form a cohesive whole. Oh well, at least Jones got to fail on his own terms this time. That’s a step in the right direction.

Essentially Mute is two movies in one—along with scenes that suggest a half dozen or so more. One that stars Alexander Skarsgård as an Amish man who lost his voice in a childhood boating accident—his parents didn’t allow the potential voice-saving surgery to happen because religion is great—and now bartends in futuristic Berlin when he isn’t whittling wood—yes, really. He’s also in love with a co-worker, Seyneb Saleh, who mysteriously disappears, leading him on a quest into a techno-noir underworld involving hackers, gangsters, prostitutes, and sex robots.

As if that’s not enough plot for one movie, there’s another story strand involving two American surgeons/torturers played by Paul Rudd and Justin Theroux. They’re living in exile as non-citizens a la Casablanca and work for a gangster. It turns out that Rudd isn’t actually a bad guy despite all of his bad behaviour. He’s doing it all to save up to by a passport and safe travel out of the country for himself and his daughter—who is typically babysat by a brothel because he’s still working on this “being a good father” thing. At some point these seemingly disconnected stories are sure to link up. Whether or not you’ll care about how or why by the time it finally happens is a reasonable question.

First the good news, Mute looks absolutely gorgeous. Oh sure, this nightmare science fiction version of Berlin couldn’t exist without Blade Runner. The neon lights, smoky shadows, crumbling skyscrapers, obnoxious advertisements, overt sexuality, and flying cars are all straight out of the Blade Runner playbook and certainly doesn’t look anywhere near as pretty or evocative here as they did in Blade Runner 2049. However, Jones does give it all his own updated and cartoony sheen that makes it feel a little different. It’s all meticulously designed and filled with satirical flourishes crammed into the corners of the frames that make it easy to get lost in. Toss in a score littered with references to Bowie’s music and a distinctly twisted sense of humour and you get an intriguing world that actually adds a little to all of the iconic reference points that Jones is stealing from. Unfortunately witty visual design alone does not a movie make.

To call the Duncan Jones and Michael Robert Johnson’s—who wrote Sherlock Holmes, Pompeii—script an unfocused mess is an almost an understatement. Apparently, the project began as a British crime movie written in the early 2000s and it shows with all it’s dated “lad’s humour” dialogue that clearly sprung from the Guy Ritchie era. No characters rise above the level of caricature and the stunt casting of the leads feels sadly underused. Despite all the intriguing themes and disturbing avenues that Jones and Johnson touch on throughout the script, they rarely develop any of it into much of anything beyond adolescent thrills and cheap shock tactics. Mute is a movie that keeps promising to divert down intriguing avenues and constantly ignores them in favour of silly schlock that never adds up to much more that the movie drunk fantasies of a sci-fi obsessed teen hopped up on a Mountain Dew bender.

The carefully crafted world of Mute hints at so many different sociological sci-fi diversions that the film could have taken. Jones clearly loaded it with ideas and since this intended to be part of an extended universe that he began building with Moon, perhaps those ideas are supposed to be explored in further chapters. Unfortunately what he made instead is a limp fable about a man silenced by an abusive youth finding his voice—ew—and an awkward crime odyssey starring sci-fi criminal versions of the leads from M*A*S*H*. The shock tactics are more often delivered in adolescent bad taste than mature sci-fi provocation. The sentimental flourishes clash awkwardly with the cynical humour. Nothing quite fits into place, even though many of the isolated elements are intriguing. In the end, this is a passion project that Duncan Jones should have abandoned. It’s still abundantly clear that the guy has talent as a filmmaker, but if he doesn’t actually deliver on that promise soon, it might never happen.

Falling somewhere the intriguing conceptual sci-fi of Moon and the big budget messiness of Warcraft, Mute highlights the strengths and weaknesses of filmmaker Duncan Jones at a peculiar crossroads in his career.
REVIEW SCORE
5
File Under: Dystopia, Netflix, Science fiction