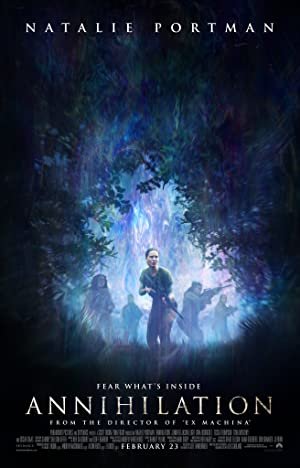 Coming into Annhilation, Alex Garland was in a special position as a filmmaker. His directorial debut Ex Machina was instantly beloved and did unexpectedly well at the box office. Toss in a screenwriting background that included the underrated duo of Dredd and Sunrise as well as the movie that started the 2000s zombie revival (28 Days Later) and the guy was in a position to do anything that he wanted next. Thankfully, he took advantage of the situation. Somehow, he managed to convince a Hollywood studio to bankroll an adaptation of author Jeff VanderMeer’s seemingly unfilmable sci-fi horror headtrip Annihilation. Obviously, this isn’t a faithful adaptation. Apart from the many scenes that would be impossible to translate between storytelling mediums, the budget would have needed to be limitless and the rating would have been the hardest of Rs. So, Garland made the material his own. It’s still a deeply disturbing and ambiguously inexplicable experience, now just a cinematic one more inspired by a cult novel than adapted from it.

Natalie Portman stars as a former soldier turned biologist who teaches at a prestigious university. Her hubby (Oscar Isaac) is still in the army and disappeared on a secret mission long ago. She’s struggling with grief when he suddenly reappears in their home with little memory of who he is or how he got there. On the trip to the hospital, Portman and Isaac are surrounded by mysterious black jeeps and sedated. Portman wakes up in a cell with Jennifer Jason Leigh who explains that Isaac disappeared on a mission to a classified location called Area X. It’s a strange shimmering phenomenon that has taken over a patch of land and seems to be getting bigger. Anyone who is sent in never returns, except for Isaac. Leigh talks Portman into joining a new expedition alongside a physicist (Tessa Thompson), an anthropologist (Tuva Novotny), and a medic (Gina Rodriguez). She agrees, they enter The Shimmer, and that’s when things get strange (well, stranger). When they awake on what feels like the first morning in The Shimmer, they realize that based on their supplies they’ve been there for days, maybe longer. Time seems fluid. Reality starts to bend. Monsters? You betcha!

So, obviously, this is an oddball genre outing from all involved. Don’t be fooled by the posters featuring Portman and co. holding machine guns. Yes, they do that in the film, but this is no action flick. Instead, this is a slow burn and hallucinogenic mind game executed by Garland and his remarkable team of craftsmen with style and thoughtful ambiguity. There’s rarely a moment when the audience feels on firm ground or settled. The movie constants shifts tracks, alters what’s known, and keeps you guessing the answers to mysteries that have no solution. It’s not a film designed to leave you satisfied. It batters and dazes audiences with images both beautiful and grotesque as well as themes that will leave thoughtful viewers in some sort of existential crisis. Boiled down to the simplest possible terms, it’s a story about evolution and the terrifying discovery that you are on the wrong side of evolutionary change. Of course, there’s also more going on than that. Yet getting to the bottom of the whos, whats, wheres, and whys is a fruitless task after a single viewing.

Superficially, the movie is an astounding bit of craftsmanship topping even the cynical chrome beauty of Ex Machina. Almost the entire filmmaking team from that picture returns to collaborate with Garland again and together they create something between an acid trip and a sci-fi/horror movie. Designs glow of the screen with a psychedelic beauty that somehow always feels threatening. The cinematography is composed almost entirely of poster worthy beauty shots. Every scene is long and measured, but only to deliver sensationalistic shocks when least expected. Boiled down to movie reference terms, it’s like some unholy union of John Carpenter’s The Thing, the existential sci-fi of Andrei Tarkovsky (Stalker, Solaris) and the sci-fi-as-metaphoric-acid-trip of 2001: A Space Odyssey. The cast are all strong, yet deliberately give muted performances to keep answer and emotions out of reach. There is humanity in the film, just not in a way that provides any of the usual cozy comforts.

Despite all of my fawning Annihilation will be a divisive movie. Those seeking silly genre entertainment will complain about all the ambiguity and deliberate pacing. Those looking to get their big brain off with an arty thinker will be put off by the gore n’ guns. Anyone looking for a movie both challenging and visceral will be thrilled, but sadly there aren’t as many of us out there as we’d like. It’s no surprise that Paramount got cold feet and decided to give Annihilation a cursory theatrical release followed by a Netflix lifespan. That makes sense. This wasn’t going to light up the box office and those who love it will want to watch it repeatedly. It’s just a shame that means a precious few will get to see this gorgeously hallucinogenic genre flick on an overwhelmingly large screen as intended. If you get a chance to catch Annihilation in a theatre, don’t miss it. Love or loathe the destination, the twisted film will transport you to another place in the ways that only movies can.

Alex Garland returns to the director’s chair after the triumph of Ex Machina with a deeply bizarre and unsettlingly intellectual sci-fi/horror yarn that should spark debate for years.
REVIEW SCORE
8.5
File Under: Horror, Science fiction