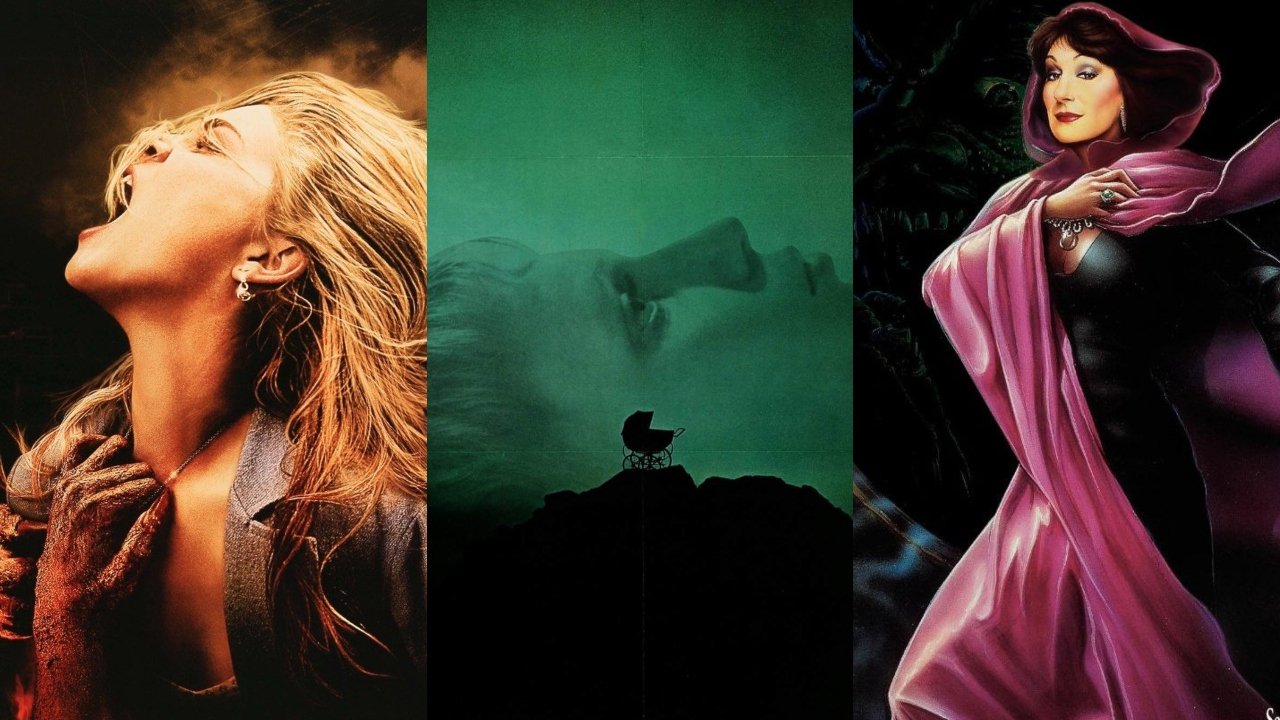 The Ten Best Witch Movies of All Time

Recently, a lil’ horror movie called The Witch was released and caused quite a ruckus. Deservingly so, too. Rob Eggers’ film was one of the most striking horror debuts in recent memory. Combining art house drama with visceral thrills, the film is both intelligent and terrifying. It already feels like a contemporary classic and it’s nice to hear people saying such things about horror flicks once more.

To celebrate the success of The Witch, we thought we’d serve up a handy-dandy viewing guide to the top 10 best witch movies in movie history, mostly because we didn’t have time for 100 movies. Oddly enough, the Halloween costume staple doesn’t have as many endearing big screen treatments as you’d think. Sure, there’s that pretty successful film series with the school of witchcraft and wizardry, but other than that there aren’t too many great films out there that dabble in witchcraft and do it well. If The Witch left you hankering for more cinematic treats featuring witches, these ten flicks should help scratch that itch.

*Note The Craft is not included because I never loved that film. Sorry 90s teens. Please forgive me.

First up, a frothy romp. This mind-bogglingly delightful 40s comedy stars that goddess that was Veronica Lake as an ancient witch brought back to life in modern day (well, the 40s) to seduce one of the descendants of the family who burned her at the stake. Unfortunately, her target is too much of a Dudley Do-Right to fall for her witchly charms, so a love potion must be concocted. As we all know, love potions never work out as planned and lots of 40s wackiness entails (in the best possible sense). Certainly those sad folks who immediately balk at the idea of a black and white movie will run from I Married A Witch as fast as their legs can carry them. But for those wise souls who understand just how magically entertaining old Hollywood magic can be, this thing is an utter delight. It’s the greatest episode of Bewitched ever conceived, only better.

Decades before delivering the most greatest action movie ever made that doubles as a feminist parable, director George Miller combined sexual politics and genre thrills in this underrated gem. Cher, Susan Sarandon, and Michelle Pfeiffer star as a trio of repressed, small town women who accidentally form a coven and invite Satan into their lives while dreaming of the perfect man. Jack Nicholson plays the horny little devil in question, a casting decision that should sum up the goofball satirical tone of The Witches Of Eastwick rather succinctly. The title is primarily a clever, dark comedy, but when Nicholson’s devil goes on his inevitable rampage against the coven of heroines, George Miller and the ILM wizards serve up a spectacular light show. Another delightful witchy romp, only this time painfully dated to 80s cheese rather than 40s classicism.

Look, you can’t have a movies list of great cinematic witches without including Margaret Hamilton’s green-skinned cackler who has inspired decades of childhood nightmares and countless Halloween costumes. If there’s a single greatest witch in the history of cinema, it’s The Wicked Witch Of The West. ‘nuff said.

When Sam Raimi left the Spider-Man franchise after making approximately a gazillion dollars and kicking off the Marvel movie revolution, the director could have made anything that he wanted. Thankfully for genre fans, he decided to dust off an old script from his horror heyday about a gypsy witch cursing a well-meaning young lady. Easily one of the finest horror flicks of the 2000s, Drag Me To Hell recaptures Raimi’s Evil Dead masterful mixture of slapstick comedy and jump scare horror to perfection. It’s a giddy sugar rush of witchy entertainment that never quite got the glowing reputation it deserves. It did fine in theatres and is well liked, but is considered a cult hit at best. It should be considered a classic, especially in the underserved genre of witch horror. Watch it again immediately. You’ll be surprised just how well the title holds up as a work of pure genre entertainment.

Along with the concurrently released Night Of The Living Dead, Roman Polanski’s Rosemary’s Baby kicked off the modern horror era. No longer was the genre limited to dusty castles and period settings. Suddenly, horror was contemporary and real. This quietly creepy title is more psychological than visceral, but there’s a reason it’s endured for so long: the shivers are still there. In particular, the movie brilliantly reinvented witches as creepy eccentric Manhattan neighbours (perfectly embodied in Ruth Gordon’s secretly sinister kook). The coven in the movie was terrifying because they could be all around you and you’d never know it until it was too late. Given that most of the horror in the flick is centred on the demon seed in Mia Farrow’s belly, the witches are typically forgotten. However, they are spectacular and should be remembered for the mundanely terrifying tone that Polanski found with his exquisite cast. (Note: if you prefer your witches to be of the cackling variety, check out Polanski’s version of MacBeth which features some of the most terrifying hag-ish witches to ever stink up the big screen).

If nothing else, Black Sunday is the favourite film of every Hot Topic employee that they’ve never seen. The breakout film by the original Italian horror maestro Mario Bava, it’s a gothic masterpiece about a witch rising from the grave to exact revenge for the sins of the past. The incomparable Barbara Steele stars as that vengeful witch, delivering an otherworldly performance that instantly made her a horror icon and helped usher a generation of lost souls into puberty. The film has the bad dubbing and lapses in logic that are a staple of the Italian horror genre, but what Black Sunday lacks in its screenplay it more than makes up for it’s dankly beautiful atmosphere and terrifying lead. A masterpiece of cinematic gothic horror (one of those movies that lead to Tim Burton existence) that deserves even wider acceptance.

Yeah…I know…you never see the witch (unless you count the inexplicable Todd MacFarlane action figure), but still. The Blair Witch Project is one of the most important horror films ever made and the fear, panic, and dread packed in the film are all the result of an off-screen witch that deserves to rank amongst the great horror movie icons even though she’s never seen. After all, the title is basically a POV experience of being teased and tortured by the Blair Witch. She’s crucial to every frame of the film, even if she never appears on them. Plus, the movie remains just plain terrifying all these years later for viewers who love a good tease. The sequel isn’t bad either, although it’s tough to find Book Of Shadows supporters, even amongst those who made the movie.

Speaking of mockumentaries about witches, here’s a special blast of horror from the silent era that deserves a bigger reputation. A fictionalized history of witchcraft filled with incredible effects, genuine scares, and imagery that will burn into your brain forever, Haxan is silent horror masterpiece that deserves to be remembered alongside Nosferatu. If you ever want to give yourself the willies, pick out a soundtrack of your favourite frightening music, turn off the lights, play it loud, and sync it up to Haxon. Good luck getting to sleep.

If you were a child in the 90s, then chances are The Witches was one of the first films to truly terrify you. Based on a novel by the incomparable Roald Dahl (Charlie And The Chocolate Factory, duh), this tale of a little boy discovering a secret witch convention is a dark comedy for children that never holds back the horror when needed. Directed by the brilliant Nicolas Roeg (Don’t Look Now), the title is visually stunning and perversely funny, but when it gets to witch time, Roeg and the puppet wizards at Jim Henson’s company deliver images ripped from every child’s nightmares. Toss in some delightful performances by the likes of Angelica Huston as the queen witch and Rowan Mr. Bean Atkinson and you’ve got a kiddie picture that actually holds up remarkably well to adult eyes. Right up until the unfortunately softened ending, The Witches captures the twisted humour of Roald Dahl better than any other adaptation and should be remembered more fondly as one of the few family horror films that can creep out viewers of all ages.

Finally, we come to quite possibly the most beautifully crafted horror title ever made. Italian master Dario Argento took dated Technicolor cameras out of retirement to deliver a psychedelic nightmare about a ballet school run by witches that still packs of punch and offers a feast for the eyes unlike anything else. Sure, it’s dated and the dialogue can be pretty dire. Yet, whenever Argento crafts a horror set piece backed by Goblin’s astounding prog rock soundtrack (inarguably one of the best ever recorded for a horror flick), it’s impossible not to be impressed. It’s a visual masterpiece that feels like a nightmare caught on film and teases the eyes and ears like few movies ever made (of any genre). If you somehow haven’t seen Suspiria by now, but enjoy witchy horror films…well…then…I’m quite jealous. You are in for one hell of a wild ride. The sequel Inferno is also very much worth seeking out. It would likely be considered a classic were it not for the fact that it came after Suspiria and that’s pretty much an impossible act to follow.