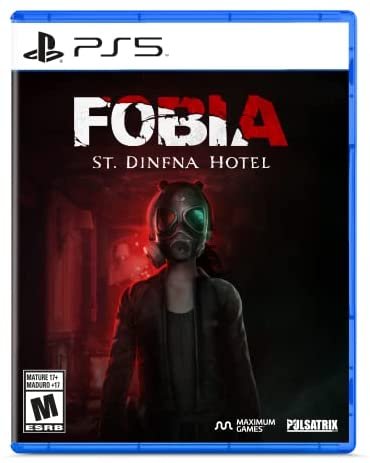 When I first saw the trailer for Fobia – St. Dinfna Hotel, it looked like something right up my alley. I love survival horror, with games like Resident Evil, Silent Hill, and even Alone in the Dark being some of my favourite games growing up. The new wave of indie horror that spawned titles like Amnesia: The Dark Decent, Layers of Fear, and The Medium, while not always knock-out hits, delivered new experiences in horror, and this is what I was hoping to find from Fobia.

Fobia – St. Dinfna Hotel is an odd game on many levels. On one hand, there is a solidly tense horror experience waiting to be explored. It features interesting puzzles, a strange mystery, healing items, monsters, and all the survival horror genre tropes that people come to expect. On the other hand, it never nails the landing on any of its many elements, leaving an experience that while interesting, can be overly frustrating at times.

It is hard to avoid the comparison with modern horror games when looking at Fobia, the developer Pulsatrix Studios, has seemingly taken some notes from recent horror titles like Resident Evil 7, featuring the first-person perspective and inventory management that defined that series in recent years. There is an attempt to blend puzzles, combat, and story, but there is always a sense that the combat and creatures never blend as seamlessly with the experience, feeling like an afterthought at times.

Playing as Roberto, a young rookie journalist currently staying at the St. Dinfna Hotel as he looks to uncover a mystery. Starting the game off with a cold open that gives you a taste of what you will expect, you quickly learn the lay of the land, and know there is something very sinister going on at this hotel. With a classical time period and great attention to detail, the hotel takes on a life of its own as you explore the halls.

“Fobia – St. Dinfna Hotel is an odd game on many levels.”

What stands as a striking building quickly becomes a place of nightmares when a strange gas mask wear-wearing young girl comes through a portal in your room. The once lavish ballrooms, and entryways, now lay in ruins, with the creatures now lurking looking to kill anyone that moves. Now armed with your wits, and a drive to find out the truth, you must navigate the hotel and find the truth to the mystery, and a way out to safety.

The story at the core of Fobia – St. Dinfna Hotel is solid, giving enough clues to what is going on, while never spoon-feeding information without earning it along the way. Roberto is likeable enough, with his frustration and fear at the situation feeling natural, while the fantastical elements slowly introduced to get a sense of the experience before throwing you into the deep end.

It is hard to balance a first-person horror experience to give enough time for the world building and the mystery, but the team at Pulsatrix Studios have achieved it for the most part. The universe of the hotel provides the perfect backdrop for an excellent story, giving a sense of crumbling opulence, and scale that sets the tone and feeling for the game.

The puzzles and mysteries provide a great venue to put the investigative skills of the young Roberto to the test. This is where it feels the team spent much of their time and designs. The challenges and concepts are devious and interesting, presenting new ways to unlock doors, explore and deal with the world around you. Even your camera in the game can be used to navigate the crumbling hallways, with it acting as a portal to a different reality, allowing you to escape challenges or get past barriers in a relatively innovative way.

What simply does not work is the obtuse way Fobia uses inventory. You will need to pick up healing items, weapons and keys as you explore the hotel, but your inventory limit is shockingly small, and as you collect items, it only becomes more unwieldy. This would not be a problem if you could drop items, or easily put them away when not in use. Unfortunately, you will often be forced often between picking up ammo or health or a puzzle needed to complete the game. This will mean you will frequently not have enough to face off against the many monsters that roam the hotel, especially considering how many shots these creatures take to put down.

The combat is simply not polished enough to be a fun recourse, with many of the creatures taking multiple shots to kill. With cumbersome aiming, and an inventory that has little room for error, you will find yourself running or dying a lot as you work your way through Fobia. There is one thing to have challenging combat by design, there is another to see glaring issues with how it is implemented that makes it tedious and frustrating.

Dealing with concepts of parallel realities, portals, fantastical cults, and nightmarish creatures, Fobia – St. Dinfna Hotel has all the elements to be a horror experience fans of the genre should embrace. Sadly, the indie roots show, and the game lacks the polish to pull off the grand concept in a way that feels fun or lacking in frustration. I want to like Fobia more than I do, but in its current state I can only recommend it to lovers of the genre, or people willing to put the time to look past the shortcomings and embrace the brilliance found beneath.