Lives Up To Being A Below Average Superhero 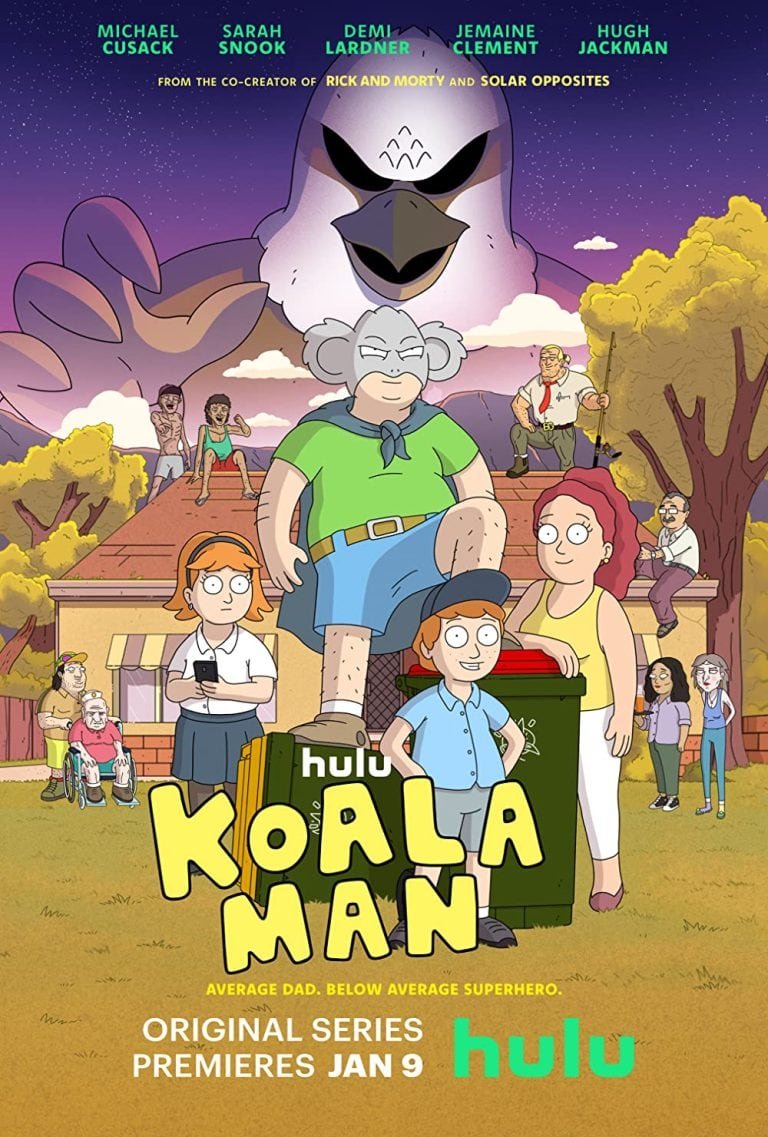 Justin Roiland has created and voiced some of the generation’s most defining animated shows—from Rick and Morty to Solar Opposites. The man just does not miss, as he also recently released his video game High on Life on Xbox and PC. While I would not say Seth McFarlane and Matt Groening are a thing of the past for adult animation, Roiland seems to reinvent and keep the genre invigorated. Koala Man effortlessly blended what worked from Roiland’s worlds with Michael Cusack’s Australian humour and similar animation style.

Koala Man followed middle-aged dad Kevin and his not-so-secret identity, Koala Man. While many superpowered heroes have powers like super strength or x-ray vision, well…Koala Man’s only superpower was being a stickler for city regulations and thwarting petty crimes in the small, suburban Australian town of Dapto.

While Dapto was typically a quaint, quiet town filled with both homely country folk and has-beens, other nefarious forces of evil both cosmic and man-made plague the unsuspecting Daptonians—it may have to do with his archnemesis, the Kookaburra. Koala Man’s quest for pretty much the whole season was standing up in the face of adversity to try to stop the weird and strange villains trying to interrupt the city’s peace all by himself (or at least he tried to do it all by himself).

One of the first things that hooked me in was the show’s catchy instrumental intro song. It was not as ingrained as Family Guy or American Dad’s intro songs, which have some well-written lyrics to go with their showtunes style intros. But it still hyped me up enough for such a lackluster superhero. Also, be sure to catch each Koala Man rule where he introduces a new code he follows—most gave me a little chuckle.

“…Koala Man’s only superpower was being a stickler for city regulations and thwarting petty crimes in the small, suburban Australian town of Dapto.”

Even though each episode had some straight-up nonsensical plots, most of the payoff came full-circle by the end of the show’s first season. I enjoyed this style of shenanigans, which reminded me of Family Guy, The Simpsons or Futurama. The show had numerous guest appearances, with some of them being staple characters such as Big Greg (Hugh Jackman) and Principal Bazwell (Jemaine Clement).

I never would have thought I needed some hardcore Aussie and New Zealand comedy until this show. With most of the voice cast and backdrop being in Australia was a nice change of scenery for an animated show of this genre—where it would typically take place in America. Most of the episodes contained Australian-based satire and references but still translated and connected well with my own North American regional humour—I even learned something new about Australia! It was fun to see another country take a jab at the U.S.

I greatly appreciated all the nods and subtle references to other media and pop culture. Some may have been a stretch, but I think I was able to catch on to some of them. Like the two doofuses of the show that roamed through Dapto and kept calling Koala Man a ‘dickhead’ really reminded me of Beavis and Butthead from their own show, even the voices and animation style for them. It was like a grown-up depiction of them if they did meth and were Australian.

“Also, be sure to catch each Koala Man rule where he introduces a new code he follows—most gave me a little chuckle.”

One of the episodes went almost as wild with their antics and storyline as The Boys, if not, on par with some of the crazy stuff that happened in The Boys—more so, on the Herogasm level. On the topic of mature content, Koala Man did not disappoint from its gory deaths, profane language of buffoonery and outlandish concepts. There was also some references to kaiju-level threats that reminded me of the new Godzilla movies or the Pacific Rim films.

By the end of the show, I was surprised by all of the story building. There was even a Marvel MCU-like ending, teasing what could be coming in season two—in the post-credit scene of episode eight. Definitely stick around for that!

While each episode got weirder and weirder, I noticed how much I liked the balance of screen time each main character received. Other than Kevin/Koala Man, the rest of his family members Vicky (wife), Liam (son) and Alison (daughter) all get some kind of focus or opportunity to express the deeper layers of the character. Even the side characters sort of got some nice backstory, since some of them either grew up together in Dapto or lived through the same time era.

“On the topic of mature content, Koala Man did not disappoint from its gory deaths, profane language of buffoonery and outlandish concepts.”

It sort of reminded me of how anime shows like One Piece, Bleach or Naruto, which have had to flesh out its big main cast somewhat equally—but Koala Man only had eight episodes to build each personality. The action and fighting set pieces were zany and fun. I felt it offered a nice contrast to some of the boring tendencies where Kevin was just being his normal, self-righteous self.

Overall, I found the show really found its big steps and provided me a breath of fresh air with its Australian setting and voice cast. It was a rare treat to see the acting talent of so many actors from Australia and New Zealand—especially hearing Clement’s voice after his recent appearance in Avatar: The Way of Water.

I would say, if you enjoy any of the aforementioned shows above or anything produced by Roiland, you will definitely find a lot of enjoyment and laughs with Koala Man. Also, Jackman’s Big Greg persona is really what I am hoping to see with his energy alongside Ryan Reynolds in Deadpool 3.

Koala Man accomplished making the mundane lives of Dapto into a series of zany mis(adventures), led by a man in his forties who ensures that his fellow townspeople are always up to Dapto code.
REVIEW SCORE
7.5
File Under: Koala Man, TV Series