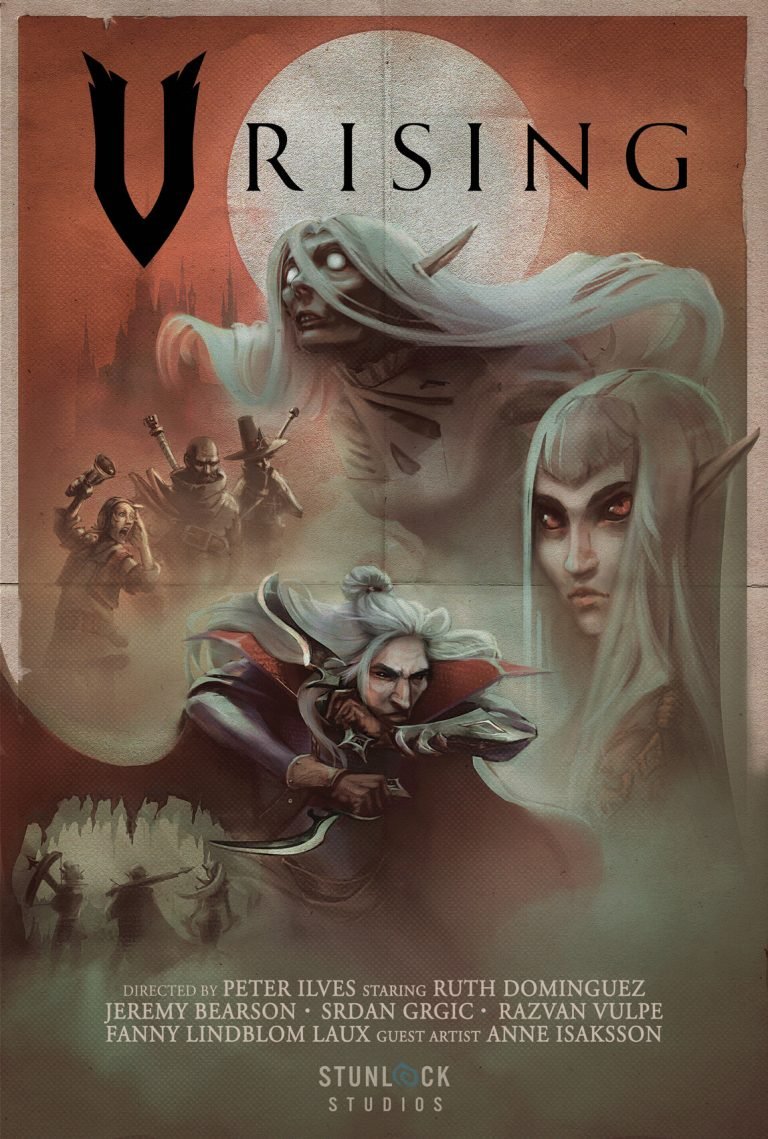 MMORPGs have been the rave for the last twenty or so years with the growth of the internet. From Blizzard’s World of Warcraft, BioWare and LucasArts’ Star Wars: The Old Republic to Amazon’s New World and Lost Ark, the possibilities have been endless. The question for MMORPG’s had always remained: will there ever be day when the genre will die out? The answer for now remains to be, not yet.

Whether you are coming off the vampiric awesome highs from the Castlevania animated show or the lackluster lows of the vampire-inspired hero in the film, Morbius, V Rising sat somewhere closer to the former. This game was like Diablo III and Path of Exile made a vampire love baby with Valheim making for a very unique vampire survival game. The building aspects were aesthetically pleasing from upgrading my cozy vampire home/lair, to scouring the lands for resources and fighting dangerous enemies before the sun arose.

For this early access opportunity, I decided to play the game primarily on PvE mode to experience the story elements, blended with some of the online aspects where I occasionally saw some other players up to vampire shenanigans. I dipped my toes in their PvP mode that had more focus on building and attacking other players versus taking on NPC mobs and mini bosses. I liked seeing how the developers had already thought of offering the options for players to host private games and dedicated servers, even though the option in this early access was red-marked and inaccessible.

Some other hidden options were a Solo Mode and Duo Mode, which may be a way to compete with the way Vampire: The Masquerade has branched into the Battle Royale genre. What is better than vampires fighting one another with dark powers than adding in some RPG and base-building elements to expand your vampire empire?

If these options are what they sound like to me, perhaps it would be like base-building in V Rising like Rust mixed with Fortnite where the matches will be time restricted and maybe, instead of a ring closing in, it would be that the daylight would be slowing rising permanently from one end of the map to the other—this concept would definitely intrigue me but seems like it would be hard to execute.

I have played my fair share of MMORPG’s in the past, such as some of the ones listed above, and I did not know what it was then that made me fall out of love for those games. Now, I have realized it was the building options! I missed out on building in newer MMO’s like New World and Black Desert, so V Rising from Stunlock Studios had shown me its attention to the fun building elements I have been missing out.

The gothic aesthetics were a bonus as adding pristine stone walls, lavish furniture and lighting, windows and many more cool features (like gargoyle statues) were fun and easy to manoeuvre once I had the required materials. Speaking on crafting materials, the game’s crafting works similarly to Minecraft and other similar survival-building games. The best part was that it revealed what materials would need to be inputted in a Workbench or Refinement building to get the desired output material or item.

For example, collecting 30 Bones granted me the option to craft a Bone Sword, simple enough. The item drop amounts when mining for resources (Wood, Stones, etc.) reasonable from each swing of the appropriate tool. I thought it showed that the developers knew how to balance the building aspects with the combat elements of the game.

To add a little challenge to what could simply be a open-world vampire survival game MMORPG, players could burn and die in the sunlight. V Rising took this concept and made it punishing for players who wanted to venture out in the daylight, I quickly learned it was possible to bob-and-weave though the shadows of the trees and foliage in the area. The other aspect of vampires is obviously drinking blood. There was a vial-like bottle that fills with blood when I would drink the blood of wolves or human enemies.

“I liked that V Rising kept their leveling system simple and nothing too intricate.”

I really liked this added difficulty, and the small dash was such a crucial cooldown move. The small dash leaves a shadow clone and enemies switch aggro to the shadow which allowed me to escape sticky situations. The movement speed felt slow in the beginning (no sprinting), which I thought would be my pet peeve but made more sense I played more. Like Elden Ring, players must grind to get the skills they need.

But unlike Elden Ring, I liked that V Rising, in typical vampiric style, kept their levelling system simple and nothing too intricate. If you are someone who likes the more complex levelling systems, this one would be easy as the game helps scale the players up with more health and the quests encourage the players to craft better gear as they progress the main questline.

I know I can be a stickler for a good soundtrack in anything from movies to video games and I was aware this was a closed early access beta, but I would have loved to hear a greater variety of background music—especially when entering new areas or facing some of the mini bosses. However, I enjoyed the sexy saxophone music in the menu and the hints of it in-game though!

While this was an early access build, I was satisfied with the amount of grinding and levelling that needed to be done—unfortunately, I could not accomplish what I wanted within the game preview’s time limit to play. But, with the time I had, I enjoyed every aspect V Rising had to offer.

I thought everything was intuitive since I was used to how MMORPGs played, even the controls were standard for basic controls. I am confident new players to the genre would still be able to catch up to more seasoned players the more they play, as long as they follow the main questline tutorial.

As I did not have the opportunity to enjoy the game with three other vampire comrades, this would be something I would be looking forward to in the public early access, giving us all a vampire experience we can sink our teeth into. And to partake in some vampire blood-tacular fun with your friends, V Rising should be open for Early Access playthrough on Steam as of Tuesday, May 17, 2022.

V Rising found that perfect balance of building, combat, some lore and exploration—I would highly recommend it for RPG fans and vampire fans alike.
REVIEW SCORE
8
File Under: Vampires